It’s a classic case of David vs. Goliath. And the Denver Three are making national waves. They are like the fly on the shoulder of Bush’s White House, the one it swats, but won’t ever go away. Check out this New York Times article today:

For President Bush, it is bad enough that his campaign to sell Americans on his overhaul of Social Security has not been considered a brilliant success. Now a flap over who got to go to one of the president’s recent Social Security events has erupted in a swing state, showing the power of a dogged little anti-Bush group now called the Denver Three to irritate the Goliath of the White House.

Who are the Denver Three? Alex Young, Leslie Weise and Karen Bauer. 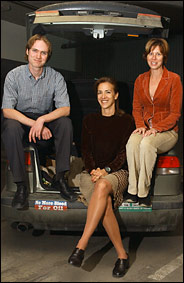 Ok, it’s not the cover of Rolling Stone, but I’d lay odds that might be next.