January 22, 2006, 1800 hours. From what I’ve heard there are four camps like Camp Algiers spread throughout New Orleans. Ours is a military installation that is currently housing roughly 975 people. 75% are military, mostly National Guard, but some Army, while the other 25% are volunteers from various churches and like organizations around the country. There are also a few paid laborers staying here, but apparently they typically migrate more towards the FEMA runned camps a few miles away. The camp is set up in five tents that span the size of a pro football field. There are about 200 cots per tent. His and hers showers are available, as well as 10-15 port-a-potties outside each tent. There’s a chow hall, a laundry tent and a recreation tent (where I watched my beloved Broncos get smashed by the Steelers today). It is a camp full of hope and promise, filled with lives that have purpose here and believe they can provide a source of inspiration with their hearts and hands. We started the day in typical military fashion. The bugle announcing the dining room was open around 5:30 this morning and plenty of movement in the tents so no one missed their window to get they’re grub on. 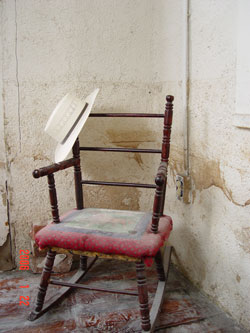