I’ll be the first to admit that this post is only loosely Colorado-related, but there are two rationales for including it here: 1) I got the picture below from a Colorado blog, renegadecrafters, and 2) the topic of Intelligent Design has come up in this space before after being floated as a possible legislative idea by Colorado Sen. Greg Brophy. I figure that justifies this post enough, and besides, there’s nothing interesting going on in politics today otherwise.

Now, let me start by saying that Intelligent Design isn’t something I really care about as a theory one way or the other, aside from my strong belief that it has no place in a school science class (and if it does, I hope we’re also teaching about The Flying Spaghetti Monster). However, there are parts of the Intelligent Design/creationism idea that I do find quite entertaining, which is summed up well by the picture below: 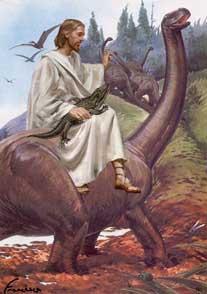 I shudder to think that this image could actually appear in a textbook that my children could one day read in science class, but from a pure marketing standpoint I can see why this theory could catch on. Jesus does look pretty cool riding a dinosaur.

I also love this picture because of all of the unanswered questions it presents, and since there is no scientific basis for Intelligent Design, I figure I’m as qualified as anybody to answer those questions. With that in mind, I decided to do an Intelligent Design Q&A with myself, based on the picture above:

Q: Why is Jesus riding on a dinosaur?

A: You see, Jesus was sent to earth to cleanse man of his sins, but God didn’t think that he was ready to preach to people, so he had him practice on creatures with smaller brains. Like dinosaurs.

Q: Why is Jesus carrying an alligator in the picture?

A: That’s a very good question. I’m sure you are familiar with the theory of evolution that sea-based creatures crawled out of the water onto land, which is supposed to be a pivotal point in the evolutionary process. Well, that’s all bunk. Jesus carried sea creatures onto land and taught them how to be land creatures. Sometimes he rode on the back of dinosaurs, since some sea creatures are very heavy and it would be tiresome to be dragging them onto land by yourself.

Q: I see from that picture that Jesus is wearing leather sandals. Are those from the hide of a cow?

A: Actually, those are Brontosaurus sandles. They were much stronger than cow sandals.

Q: But isn’t that a Brontosaurus that Jesus is riding?

A: It is indeed. Jesus’ sandals were made from the hide of that particular Brontosaurus’ dead brother, who was killed for his sins.

Q: I have heard that dinosaurs were wiped from the earth because of their sins. Is that true?

A: Yes, it is. There was no comet or “global warming” phenomenon that caused the extinction of dinosaurs. God killed the dinosaurs because some of them were engaging in homosexual behavior. In fact, many dinosaur species died out because they stopped reproducing in enough numbers when an overwhelming number of them started to engage in homosexual relationships.

Here’s a little-known fact that may interest you on that subject. The Tyrannosaurus Rex may look like a scary dinosaur in today’s movies, but that is just the result of Hollywood liberals trying to re-write history. T-Rex wasn’t a ferocious carnivore. T-Rex was gay — a gay hippie vegetarian.

Q: I’m curious about the clothes that Jesus is wearing in that picture. He seems to be wearing the same type of tunic that I have seen him wearing in later depictions in Jerusalem. Wouldn’t his clothes have gone out of style?

A: Jesus never goes out of style. He brought the tunic to Jerusalem, making the retro prehistoric look popular for another several hundred years. Most Israelites were wearing velour suits prior to Jesus’ arrival, and they eagerly changed to the more comfortable and breathable tunic.

Q: How did Jesus shave his beard?

A: Many of the Tyrannosaurus’ were hairdressers.

Q: Okay, I think I’ve got it, but I have one more question: Jesus looks full-grown here, yet the Bible talks about the Virgin Mary giving birth to him as a baby. I don’t understand that part.

A: Did I mention that Brontosaurus sandles are quite comfortable for hiking?