When DPS superintendent Michael Bennet closed Manual High School last year, it was seen as more evidence of the decline of public education. Cut to 2007. Manual is reopening under the guidance of education wunderkind Rob Stein, who left the cushy environs of Graland Country Day School to run his alma mater (see page 92). On top of that, as we compiled our list of top high schools, a surprising reality surfaced: plenty of Denver-area public high schools are more than holding their own against their private rivals. Ranking them according to key criteria, we got a vivid picture of how well these schools prepare their students for the next step. And to show that it’s not only the “elite” schools that are inspiring students to loftier heights, we present writings from students at an Aurora high school that illustrate how kids who lack certain privileges still can offer remarkable insights. Whether public or private, education in the Denver metro area is alive and well. 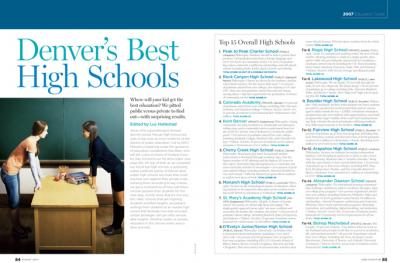 Philosophy: Students should be able to pursue their passions • All graduates must learn a foreign language and serve 100 hours of community service • In 2007, 81 graduating seniors earned $4.2 million in scholarships and will attend schools including Duke, Baylor, Bard, Cornell, and Oberlin. total score: 64 (out of a possible 105 points)

Philosophy: Classes are driven by the students, and the school finds teachers “for the classes kids want.” • 85 percent of graduates attend four-year colleges, the majority to CU and CSU. Have also had graduates attend Harvard and Vassar, among others. • Special requirements for graduation: 20 hours of community service total score: 61

Philosophy: Focuses on the technological aspects of education, allowing students to be trained for their place in the modern working world driven by adaptation to technology. total score: 47

Philosophy: All girls. A Sisters of Loretto school. “In Loretto, we always talk about risk-taking.” The single-gender approach means girls “are more confident and successful, the leaders, the scientists, the artists.” • 100 percent of graduates attend college, including Stanford, Duke, Georgetown, and Amherst. • Tuition: $10,890, 37 percent of students receive financial aid • Endowment: $3.66 million. total score: 46

Philosophy: We are family. “If you walk through the halls, it’s not very clique-ish. We all get along.” • 78-80 percent of graduates go to college, including Yale, Harvard, Stanford, Duke, and Brown • Bonds: New “high-tech” high school opening this fall. total score: 42

Philosophy: High standards, teachers work students very hard, students are asked to question the world around them and are encouraged to think outside the box. • LINKS, a freshman orientation program that pairs new students with upperclassmen, and study programs that target “middle-of-the-road” and “underperforming” kids. • Bonds: Recent bond initiative will bring multimillion-dollar improvements to the facilities. total score: 39

Philosophy: Focuses on students becoming independent thinkers, self-disciplined, and looks to them to take ownership of learning. Students take a “variable schedule,” along with the opportunity to have unscheduled time. • 85 percent of graduates go to four-year colleges, including RPI, Stanford, Northwestern, Purdue, and the Colorado School of Mines. Graduates were awarded $9.7 million in scholarships in 2007. total score: 36

Philosophy: 75 percent Catholic: “Our faith is what we teach as the fundamental principle in all that we pursue in academics, life, and spiritual growth.” • 98 percent of graduates attend four-year colleges, including Air Force Academy, Loyola Marymount, University of Denver, and Catholic University of America • Tuition: $8,600, 49 percent of students receive financial aid. total score: 33

My School, My Words

Aurora’s Gateway High School enjoys few of the benefits top schools take for granted. That’s not keeping its kids from having compelling insights about adolescent life.*

Damn she looks nice and…what is she wearing?

I hear the drama queen from the further side

The third boyfriend this month? What does love mean anymore?

It hurts seeing your ex around with someone new but…

The hand you hold as you walk fits perfectly

Kiss the honey before you enter that class and…

The bell rings, here’s the teacher you love to hate

Two chapters by the end of the period? I’d rather just nap

The teacher makes an exit and… pop go the cell phones

A few minutes left and…

No food in the halls so let’s sneak it in

Good thing this is your favorite teacher

Oh but careful the principal is watching

That special someone’s in the next class…can the bell ring now?

They ditch the next period so…why don’t you?

Hurry home you’ve got a lot to do and…

Finish in the morning ‘cause your eyes are just hurting and

Jump in jump out shower’s barely running and…

Comb the hair ‘cause impressions matter

Through the crowded halls…

Be careful what you say, a bloody nose is the last thing you need

Take a deep breath in, and the whole world silences. Thoughts of becoming grown encircle my mind. This is it! The beginning of the rest of my life. Whew, let my breath out, and I snap back into reality. The Oly band plays at the entrance and the drums beat with my anxious heart. The mighty home of the Olympians that is my school, Gateway High.

I had walked into the orange, white, yellow, and black hallways, which had led into the gym. Music is played through these humongous speakers and once again my heart beats with its same rhythm. As I ascend towards the onyx bleachers, I say to myself how these next four years are going to be the best, both in my academics and socials.? I thought to myself, this is the place where I am going to grow mentally, physically, emotionally, and so much more. I looked for a few familiar faces and found friends from back in middle school. Wow, just three months of summer can change you forever.? I sat next to them and felt comfort, they felt the same way I had felt.

The music then ceases to play and the principal, Mr. Bailey, gives a long profound speech, one that many of us were not listening to. He spoke of how to achieve excellence and how to help each other in to not dropping out. We looked around us, we were the largest freshmen class and over half of us would not be here come graduation. Mr. Bailey’ s speech ended with a powerful bang when he broke five thick wooden boards with the end of his hand, just one hit, and they snapped like bricks. So that’s why he was dressed in a karate suit with a black belt.

Freshman year ended so quickly and I achieved what I wanted for my first year, and then came along sophomore year. The Oly band plays at the entrance and the drums beat with my anxious heart. Though I was still an underclassman, I felt like I owned the school. I strolled through the hallways and made Gateway my second home. I wanted to start school the way I had always done my entire life, but the case of senioritis took its toll on me a bit too soon. From there on it led into my junior year.

The Oly band plays at the entrance and the drums beat with my anxious heart. This time, an upperclassman. You never realized, but freshmen are really immature, you wonder if you were ever like that. Senioritis still haunts me and I just say to myself, just one more year to go, and with that last year to go, I realize that high school is just starting and that it is only another chapter in my life for I have the rest of my life to make it the rest.

As I walk down the halls of Gateway High School

Knowing that many attendees are nothing but a fool,

I hear various rumors of failing, fighting, and fear

After pondering and dreaming of months in the sun,

I begin to recall all of my previous fun

Simply walking into “First and Main,”

Makes me think of all that I’ve come to gain

From, “Hola” to anti-derivatives, numerous teachers lived their dream

Making a difference, effecting the rest of my life

Helping me through every strife

Playing football, laughing with friends, or serving a detention

With this, came experienced true bliss

Every day dreading waking up and getting dressed

Or doing homework late and studying for finals stressed

It all seems to be the slump in my young age,

But now it reveals to be an amazing and unforgettable stage

And wherever I’m soon to come, this school, I will forever trace

Gateway High School is the place to be. My school has great diversity and is one of the best places to get an education. People that don’t know anything about Gateway or that are just single minded look down on us. They don’t know how to overcome adversity. They always try to put us down or cheat us in some way but no matter what we love our school and we keep our OLY pride! I love my school because we rarely have popularity contests. At my school there isn’t an “it clique” or a “fab five.” We all like each other and we all almost always get along. All though high school is high school so there is the occasional cat fight and he-said-she-said drama. The teachers and staff at my school our so wonderful and understanding they try to make Gateway a safe relaxed environment so that kids can have a place to come and forget about what is going on at home. They teach us more than what we need to know to be the next math wiz or congressman, they teach us life lessons to help us survive. All of us have been through a struggle so we know what its like to need someone to talk to. At Gateway we try not to give up on each other, we want to be there for each other just in case someone needs to talk. The kids here are not the richest or the prettiest or the poorest or the worst, we are simply GHS and we are proud of it.