I caught the Denver Center Theatre Company’s production of “The Diary of Anne Frank” last night and came away impressed.

Few stories about the Holocaust are better known than that of the teenage girl who hid from the Nazis with friends and family in an Amsterdam attic for two years. So it would have been easy for this production to have fallen into movie-of-the-week sentimentality. But the cast — headed up by Aya Cash as Anne and John Hutton as her father — avoided that trap with engaging performances that were, in the very best sense of the word, human.

But most impressive of all — and I say this without taking anything away from the cast — was the set designed by Robert Park Morgan. Performed in-the-round in the DCPA’s Space Theater, Morgan’s cramped set pulls the audience into Anne’s claustrophobic world.
That sense was only enhanced by director Paul Mason Barnes’ decision to have the actors remain on stage during intermission, quietly going about what would have been their characters’ daily routines inside their tiny prison, while we in the audience were free to wander out to the lobby for a latte.

“The Diary of Anne Frank” is playing through Dec. 15. To better accommodate families, lower ticket prices are in effect, and weeknight shows start at 6:30. 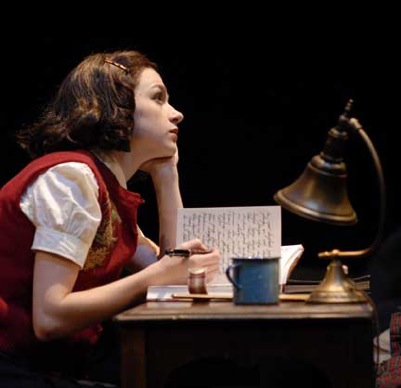