I’ve used Denver’s light rail many times…on weekends. Yesterday, I thought I’d test the weekday rail commute from Littleton to the office downtown. Maybe it’s the inreasing pain at the pump, or an effort to pollute less, but it’s crossed my mind frequently and I was going to check it out. No big deal. Right? 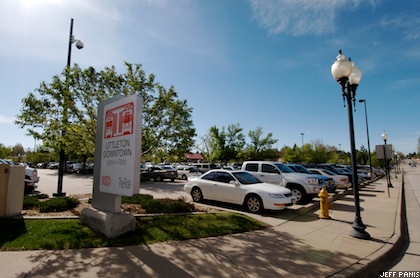 8:21: I arrived at the RTD Littleton Downtown Station thinking I’d park and and be on the train in 5 minutes. I trolled the lot a few times, crossing paths with other drivers seeking an available spot as if we were playing a game of musical chairs, but was unable to find a spot. I noticed a sign directing me to an overflow lot not far away. Okay, I could walk a few blocks. 8:28: I drove the maze of one-way streets in Old Town Littleton imagining an oasis of asphalt with maybe a car or two scattered across an abundance of available parking. After all, this is an overflow lot, a place to go if the main lot is full. 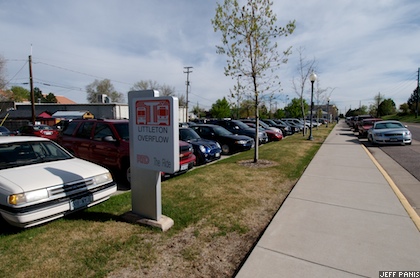 8:32: I pulled up to the entrance of the Overflow Parking Lot and was greeted by a sea of parked cars. No way. I cruised the lanes in disbelief. After a few minutes of circling I stopped to consider my next move when I noticed lines of cars parked street side. Maybe I could browse the neighborhood and get lucky. Minutes passed, several streets explored and all I found were signs labeled “No Parking” or “2 Hour Limit”. I kept going. 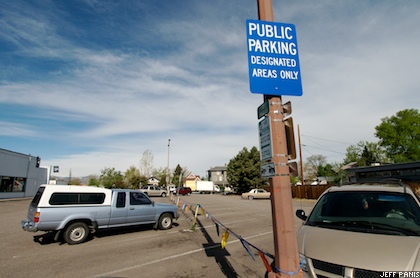 8:42: Frustration grew when, surprisingly, I spotted a public parking lot seemingly vacant of cars. This was it, parking salvation. I entered the lot and patiently chose the perfect spot–you know, the one without a car on either side and a bit of afternoon shade from the trees nearby. Wait. On the light pole in front of me the sign read, “4 Hour Limit”. C’mon. Since when are there enough people with 4-hour work days to justify an entire lot? I knew in the back of my mind the lot wasn’t meant for the all-day commuter but I was beginning to believe there was a conspiracy against me, or maybe Ashton Kutcher was filming me from that mini van for a future episode of Punk’d. 8:46: It was nearly a half hour since this quest began so I figured why not return to the first lot for another try–surely someone has left by now. I trolled again. No luck. 8:50: I was pissed. With frustration boiling over to anger, I was on a mission. The next rail station toward downtown is the Oxford Street RTD Light Rail Station just east of Santa Fe. It’s a small station, a blip on the light rail map, surely there would be a spot close to the station. 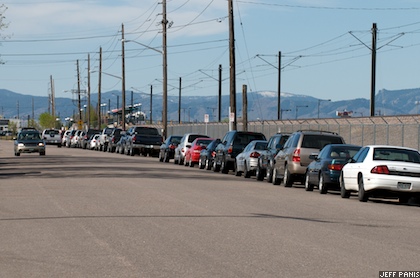 9:01: Are you kidding? Six blocks away? I realized what an idiot I was assuming this was going to be easy, or convenient. Where’s the next station? 9:05: Englewood Civic Center. Do or die. 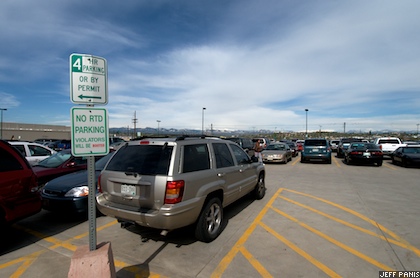 9:13: The Englewood Civic Center Parking Lot is big–there must be a few hundred spaces here. Slowly and methodically I searched the lower level. Nothing yet. Ever have a moment of weakness where you tell yourself it would be acceptable to park in one of the 10 available handicap spots? I kept driving and was determined to find a spot, there are so many. I drove up the ramp to the top level and continued the quest. Still nothing (except for the 50 or so empty spaces labeled “4 Hour Parking – No RTD Parking”). Feeling discouraged I thought, “Screw this, if I drove to work by now I’d be at the office, on my computer, attending to tasks begging for my attention”. Defeated, I began to head down the ramp to exit the lot. Wait. Out of the corner of my eye I saw it, an open spot. Without hesitation I casually turned and parked. Finally. 9:23: I was on the D Train headed toward the 16th Street Mall and California. 9:50: I walked through the office door at 15th and Curtis, nearly an hour late. That trip was a good ol’ rookie beat down and I deserved it. There are hundreds, or thousands of people doing this every weekday and I thought I could casually stroll into the lot and join in the fun. Hopefully RTD is well on their way in planning for expanded parking throughout the Denver light rail system. Or, is that just the rookie in me talking?