Not since the Nutcracker has the Ellie Caulkins Opera House seen as many children, glittery dresses, or small sweater vests as it has this week. Since Tuesday, tiny theatergoers have turned out en masse to see Disney’s High School Musical, the upbeat musical running at the opera house through Sunday.

In the world of musical theater, High School Musical is the new star. Released in 2006 as a made-for-TV Disney movie, the show has skyrocketed to international fame, winning Emmy’s and Billboard Music Awards, and inspiring novels, T-shirts, and backpacks. Its latest incarnation is the touring musical that’s stopped in Denver this week. 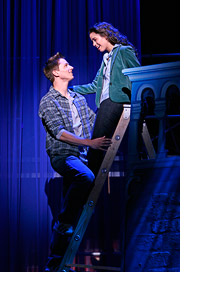 The story is focused around high school basketball jock Troy and the new girl, math geek Gabriella, who secretly try out for the school musical, which begins as a cheap Grease knock-off. As it progresses, it doesn’t get much more original or sophisticated. Song number four has no other words than those in its title “Get’cha Head in the Game,” and during detention, the students make farting noises.

Yet kids love it.

The dance-party choreography and punchy, uplifting songs have them crouched on the edge of their seats and gaping. Similarly, the familiar storyline of good kids beating out bad kids (Troy and Gabriella must outperform the conniving drama club president and her brother for the musical’s leads) appeals to a child’s sense of morality.

As children watch, enraptured, it’s hard for the adults not to enjoy the show, too. Since when do theater patrons get out of their seats to dance along? And, how often is it this easy to see the stage? (No big–adult–heads block the view.)Â  So, while the lyrics may require a bit of tuning out, and the dancing is no Martha Graham production, High School Musical is definitely worth it.

Even if it’s just to hear the child in the next row thank her mother at the end at the end of the show.