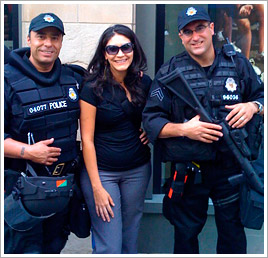 I don’t think of myself as a violent person. I’ve never been in a fight and tend to become uncomfortable around unsanctioned physical confrontations. But a funny thing happened on the way to an immigration panel on Monday that changed me. This story starts at the bar of Osteria Marco, where I stopped for a quick lunch. Not long after I sat down, two shady characters pulled up on the bar stools next to me. The pony-tailed man sitting nearest me (let’s call him Dick) said he and his Heineken-drinking pal were from New York, in town for the convention. I got up to find a quiet area to make a phone call, and when I returned, Dick and his buddy were gone.

We ate quickly, and when I reached into my bag, which had been unthinkingly placed on the stool between Dick and myself, to grab my wallet, it was gone. At first I wasn’t entirely sure that I hadn’t forgotten it at home. A quick call to my bank confirmed the card had been used at Virgin Megastore and the Sunglass Hut on the 16th Street Mall. About $500 in all had been charged in a matter of about 30 minutes, but I was also carting $160 cash. And my driver’s license, which I’d need to show with my DNC credential to enter the convention and the week’s events, was gone. The week that I’d been so geeked out about was just starting, and had been compromised by two stinky creeps posing as New York delegates, the only possible suspects. I was livid. Seeing red, I headed for the Mall, hoping Virgin would have the guys on tape; the customer service rep at my bank told me that would help when filing the police report. Just a few blocks down the Mall, I ran into a packed group of anti-abortion protesters lined by geared-up policed officers. Annoyed, I took a quick right down Welton at about the same time that I answered a phone call from my boyfriend. I didn’t have a chance to say more than “hello” before I looked toward the sidewalk ahead. And there was Dick, walking leisurely toward me, swinging his bag of goodies from Virgin. (The next moments passed rapidly, but they have been corroborated by witnesses, including cops and security, who now think I’m kind of a badass.) The first instinct was to yell. “You! … Give me my wallet back!” The second instinct was to hit. I ripped the Virgin bag out of his hands and swung it at his mid-section a few times. “Give me my wallet, asshole.” I balled up a small fist and launched it at his face. “Ow. Ouch!” Still no wallet. I grabbed at his T-shirt, right near his collarbone, and ripped, catching a little bit of flesh in the process. “Ouch. Stop it!” he complained. I switched back to the yelling, thinking a steady stream of “Help!” might get some attention. He reached into his pocket, threw a handful of cards to the ground, including my license, and started to run toward the Mall. Two women chased him, but the security officers on the corners of the surrounding blocks had also caught on. He was busted. It took a little more than four hours to file reports with two agencies (DNC-hired security and the Denver police, all of whom were incredibly friendly and extremely apologetic for the time-suck), but I got my cards back. Even my wallet and all my cash. Dick, a Denver shelter resident, tried to say that I randomly attacked him, but he’d been on a DNC picket-pocket spree, collecting wallets across the city. As the security officers told me, big events like this are a heyday for thieves, some of whom will potentially make out with as much as $10,000 before the convention is over. Most of Dicks’ victims will not get their cash back (hopefully their card companies, like mine, will reimburse them), but they can rest somewhat assured. Dick will soon run out of things to pick in his jail cell, though I may have to go to court to make his felony charges stick. I think I can handle that. I’ll just have to keep my hands to myself.