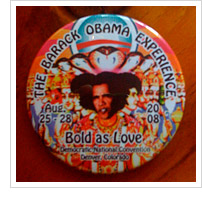 Yesterday, while purchasing some Obama buttons as souvenirs for friends, I must confess that I bought one for myself. The pin holds a doctored image of Jimi Hendrix’s Axis: Bold as Love album, with Obama’s face superimposed on the body of the guitar hero. There’s an imperfect analogy between Hendrix’s arrival onto the American music scene and Barack Obama’s speech last night.

In 1967, Jimi played his first major show in the States at the Monterey Pop Festival, after launching his career in England. Along with The Who, his band was one of the headliners, but neither Hendrix nor The Who’s Pete Townsend wanted to follow the other because both guitarists and groups were known for pulling out all the stops. As the story goes, they flipped a coin and Jimi, lost so he had to play after The Who, which then closed its set with Townsend smashing his guitar and drummer Keith Moon destroying his kit. Hendrix had a tough act to follow. In terms of this analogy, with Obama playing Jimi, he obviously got to perform before John McCain. (Instead of any coin toss, the party in control of the White House gets to hold its convention second, but this year’s timing, with the assemblies on back-to-back weeks, is pretty unusual). But it’s clear that Obama prepared with McCain’s follow-up act in mind and, with more than 80,000 people screaming in a packed stadium, it felt like the Democratic nominee was channeling Hendrix, too. When Hendrix walked onstage at Monterey, he gave an inspired performance that blew away The Who. And, then, after a jaw-dropping set, Jimi lit his guitar on fire; an act that transcended him to guitar god. Monterey is now considered the beginning of the Summer of Love, and the artistic kickoff to the activist movement that developed to oppose the Vietnam War and fight for equal rights and environmental protections in the late 60s and early 70s. Last night could be remembered as Obama’s Monterey–the moment where he combined his talents, empathy and energy as both a speaker and performer. Maybe it’s a little overstated to compare Obama’s acceptance to Jimi’s screeching guitar solos kissing the sky, and then his ignition of his instrument as if a ritual sacrifice. But there was a purple haze surrounding the stadium yesterday, and even Pat Buchanan was gushing, to the delight of the adoring masses gathered outside MSNBC’s Union Station set, that Obama had delivered a singular political and personal performance, without peer in recent memory. Might McCain upstage Obama next week? Maybe, I guess (I’m sure someone thinks the band Moby Grape was the ultimate highlight of Monterey). But the post-convention rumor that the Republicans were suddenly contemplating pushing back their convention hints at what most people are thinking after last night: No one wants to follow Obama.