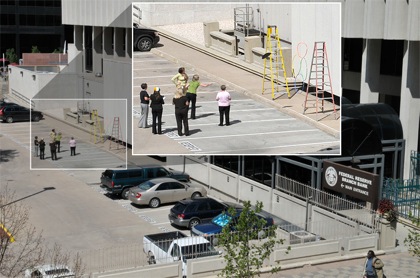 Employees at Denver’s branch of the Federal Reserve were seen playing some kind of jury-rigged circus game today, tossing Frisbees through different-colored hula-hoops in the parking lot.

Are they trying to decide which American banking giant to bail out next? (The orange hula-hoop, we hear, is AIG.)

Curiously, a woman taking notes was wearing a hat with Ireland’s colors. Are the Irish attempting to outbid London-based Barclays for the bankrupt Lehman Brothers?