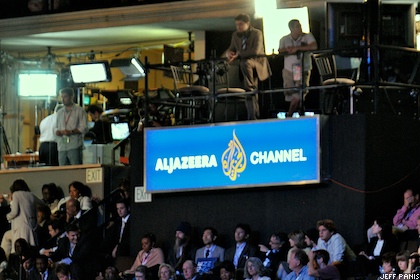 Golden–“Where the West Lives”–grabbed some unexpected attention before and during the DNC when it became the locale of Arab news network broadcasts. When Al Jazeera English announced plans to base its convention coverage out of the city for the week, some citizens bristled at the association. Then, when Golden’s city manager agreed to host a pork-free backyard barbecue, so the network could show its viewers a typical neighborhood gathering around the convention, tempers flared higher. Some residents assumed that the city was endorsing some kind of Islamic agenda. The city and the network survived the hubbub and vitriol, and in the aftermath, we came up with a five-step community-prep program, informed by Golden’s mayor, Jacob Smith, for the next time Al Jazeera rolls into a local city.

1. Try a pre-emptive strike Smith says the city was blindsided by the reaction of a group of citizens that flipped out over Al Jazeera’s presence in town. “We didn’t anticipate that there’d be folks who were as upset as they were,” Smith says. (The manager eventually cancelled plans to host the barbecue himself to remove any appearance of collusion between the network and city government.) Perhaps a community discussion or two, and a viewing of the documentary Control Room would help shed some light on the network. 2. Be clear on the “known knowns” Al Jazeera is considered the “CNN of the Arab world” outside the United States, and media critics credit the network for enabling Arabs to hear American and Israeli voices, as compared with the demonizing propaganda they might get from elsewhere. But not everyone knows that, particularly those people who have taken the Bush administration at its word. In April 2004, former Secretary of Defense Donald Rumsfeld accused Al Jazeera of producing “vicious, inaccurate and inexcusable” reports on American soldiers killing civilians. It turns out that the Arab network wasn’t off-base with its coverage, and the White House was thinking about bombing the network when Rumsfeld was publicly blasting them. (Confusion is also fed by a misleading website, Aljazeera.com, which isn’t associated with the network but does feature anti-American and anti-Semitic content.) 3. First things (and Amendment) first For all the headaches, Smith points out that Golden has no say if a network, be it Al Jazeera or Fox News, decides to set up shop in town. The First Amendment allows news organizations their freedom, and Smith says a city shouldn’t try to deny access to media. “Someone called me a communist,” Smith says, because he wouldn’t tell Al Jazeera to beat it out of town. “If I was a communist, I would’ve banned the news organization. Do you want the government deciding what news you get?” 4. Prepare for mall wars, but a little worse When the taboule hit the fan over the barbecue, Smith says city staff heard some of the most dramatic verbal attacks they’ve had to endure during his time as a councilman and mayor. He says the outrage kind of compared with some of the fiercest discussions that have taken place on new developments and land-use issues, but with an added element of vitriol. 5. Don’t doubt the kindness of strangers Negative publicity may have made headlines, but Golden heard just as many, if not more, comments in support of Al Jazeera’s presence and the opportunity for the city to show Arab viewers how American politics play out in a small city. Seventeen families volunteered to host a barbecue for broadcast, according to Smith, and he says the station got its backyard money shot after all.