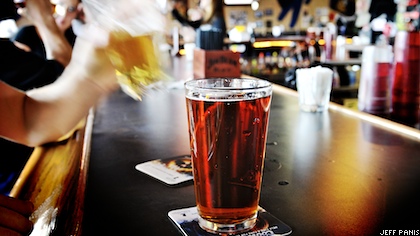 Saturday started off well. I was up at 9:30 a.m., eating croissants shortly after, but then, like appointments in a doctor’s office, my plans began to spill into one another. Laundry ate up email time. Emails dismissed voting, and by the time I was en route to afternoon cocktails, I was running, madly trying to catch up with all that I’d planned. I arrived at the bar 30 minutes late, breathless, and a bit disoriented. When I walked up to the bartender, slowly pulling pours of Deschutes, I stood stunned. What did I want to drink? The neighbor to my left was ordering a beer, and the servers were carrying trays of gin and tonics. I glanced at my cell phone. 5:30 p.m. On a weekday, that’s prime happy hour time. But today, I still hadn’t eaten lunch, and beer before the mid-day meal seemed wrong. I sheepishly ordered a Coke.

Back in the late ’90s, the Replacements sang, “All I wanna do is drink beer for breakfast.” Today, those lyrics are pasted all over the Internet, but with a soda in hand, I wasn’t sure I could even cut it in an anonymous chatroom where people imagine breakfast beers. Nor could I hang with the staff of Denver’s British Bulldog, which serves its first pints as early as 7 a.m. Beer for breakfast isn’t for me and neither is beer before lunch. Beer with lunch, though, is another story. Sitting down to a meal of limey ceviche or barbecue-sauce-laden ribs, instead of stumbling into a poetry reading on an empty stomach, I would have ordered a chilly draft to prolong the meal and wash down the food. In a Scottish bar or on an early-morning microbrew tour, I might have even considered a pre-lunch brew. I’m betting The Replacements or the Bulldog staff, though, would ask the bartender to pour another Deschutes. For many, the beer clock rings early, posing a question, I need help answering: if I were to drink a beer for breakfast, or even brunch, what should it be?