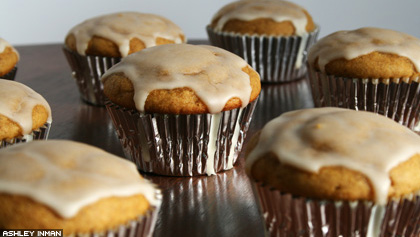 Autumn cold crept in this week, dropping its big icy raindrops, whisking its chilly winds through downtown corridors, pushing forward its dark, frosty mornings–and inspiring me to buy a can of pumpkin. As the last of the golden leaves shook themselves free of the trees, I baked a batch of warm pumpkin cupcakes to stop autumn in her tracks. Since my childhood, pumpkin has been our family antidote to crispy weather. Like hypochondriacs downing orange juice to stave off the flu, we made Grandma’s pumpkin muffins. The scent would waft through the house as they were baking, filling our empty school-day afternoons. (One of those afternoons, I greedily ate 12 muffins.)

Making pumpkin cupcakes promised a similar solace. I filled teaspoons with aromatic cinnamon and inhaled the dry heat of Northern Africa. I scooped tangerine-hued pumpkin into measuring cups and remembered how perfectly Big B’s tart apple cider complements pumpkin carving. I cursed the cold for dropping in so unexpectedly that I couldn’t stop by the farmers’ market or Berry Patch Farms to pick up a fresh pumpkin. (I have no biases against the quality of canned puree. The compliments are just more profuse if your friends know you made your own.) That night baking, I whirled and whirled with my hand-mixer, and I forgot the windfall and shaking branches outside. In front of me, I had a silky batter that would rise into the lightest of cupcakes. The soft, baking aroma filtered into my bedroom, making it especially easy to fall asleep later. The following day, when I brought the cupcakes to work, my colleagues grouped around the treats and cheered. The autumn cold I’d felt the day before was gone, and I simply hoped that when it returned, I’d have another recipe to brush it off. And that day will soon come. Any suggestions for what I should make next?