One weekend before Halloween is a fitting time to see Woven Hand.

Not to suggest that Colorado native and gothic-Americana hero David Eugene Edwards’ band, which came to be in the early ’00s as a solo offshoot of 16 Horsepower, is only relevant on a holiday obsessed with endless horror kitsch. It’s to say that the man’s music is certifiably dark and creepy (think David Lynch, not Wes Craven; Stanley Kubrick, not Russ Meyer). 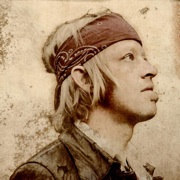 Edwards, the grandson of a Nazarene preacher, has spent his career singing about a bipolar god, judgment-day scenarios, and inner-demon wrestling. His voice is almost always tense and foreboding, and his band spikes the melodrama with wide-angle soundscapes.

Live, Edwards is often obscured behind ominously psychedelic stage lights and droning atmospherics, and the Mercury Cafe, a comfy locale for outrÃ© art and adventurous minds, is a nice fit.

Woven Hand is currently touring on their fifth album, Ten Stones. Recorded with Daniel Smith (of Danielson), a fellow eccentric Christian, the CD has more of a hop in its step than past Woven Hand releases (those were recorded at Bob Ferbrache’s Absinthe Studios in Westminster).

Where most of the Woven Hand catalog employs negative space, Ten Stones has a full-band feel, with a heavily amplified drum set and heaps of insistent guitar noise. There are even notable detours. On “Quiet Nights of Quiet Stars,” Edwards pulls off a Sinatra croon over bossa nova rhythms and somehow still manages to sound characteristically brooding.

For those looking for a fairly comprehensive retrospective on similar Denver music, specifically the bleak folk/alt-country sound that Edwards and friends have developed over the past fifteen years, peruse Smooch Records for classic releases from 16 Horsepower, Slim Cessna’s Auto Club, and The Denver Gentlemen, a collective that has included members from the other two as well as personnel from frequently gushed-about Denverites DeVotchKa.

Plan ahead: DeVotchKa plays two Halloween weekend shows at the Boulder Theater on October 31 and November 1, with Bela Karoli and Paper Bird. If you’re in the Springs, check them out with opener The Haunted Windchimes, an up-and-coming Pueblo band, at CC’s Armstrong Hall on October 29.