The finance, insurance, and real estate industries have long been among the most aggressive when it comes to donating money to politicians, doling out $2 billion over the last two decades. You might think that in these tough economic times, the industries would give less. But, since January, the sectors have ramped up their giving, part of an effort, some watchdogs allege, to help lobbyists become better beggars for taxpayer dollars.

Although the House of Representatives on Monday shot down the proposed $700 billion economic bailout, sending stock values tumbling, industry contributions appear to have worked. Representatives who supported the bailout package pocketed, on average, 51 percent more in campaign cash from the industries than those who opposed the measure.

For instance, Colorado’s Ed Perlmutter, elected in 2006, has accepted $589,000 in campaign contributions from the industries since coming to office less than two years ago. More than $341,000 of that money came during the current election cycle, according to data by the nonpartisan Center for Responsive Politics, an elections watchdog group based in Washington, D.C.

Combining all their years in office, Colorado’s seven sitting representatives have accepted more than $4.1 million from the industries, with $1.5 million of it coming this year. That represents a 36 percent upswing in giving to Colorado’s reps for 2008. The trend leads Daniel Newman, executive director for MAPLight.org, a money-in-politics watchdog group, to claim in a statement: “Profit-driven companies wouldn’t be making campaign contributions if it didn’t buy them influence or access.”

But the giving didn’t necessarily transform politicians into instant backers of the incredibly unpopular bailout, particularly those mired in tight races, like Democrat Mark Udall and Republican Marilyn Musgrave. The two respectively received $764,000 and $139,800 from the industry this year, but both voted against the bailout. 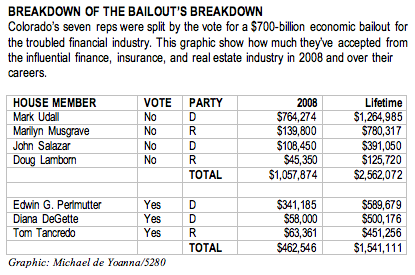 The issue won’t be going away in the days ahead as President George W. Bush and congressional leaders return to the drawing board in hopes of salvaging the bailout plan. The Senate announced it will take up a revised version of the package on October 1. For watchdogs, another vote will offer another chance to scrutinize the finance, insurance, and real estate industries’ influence in politics and policy.