Throughout December, our Tasting Notes blog will feature web-only interviews with select chefs from this month’s roundup of Denver’s Best New Restaurants. 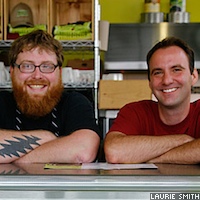 Six months after entering the Denver restaurant scene Masterpiece Delicatessen has outgrown their original space. (The deli added 20 seats over Thanksgiving weekend.) Taking a step back from the whirl of success, Chef Justin Brunson (pictured at left with co-owner Steve Allee) shares his experiences from Masterpiece’s first months in business. Steve and I met working at Luca d’ Italia. We wanted a restaurant where people were paid for their work. At Masterpiece, we have a tip-sharing system. Were not taking any shortcuts. We use the same ingredients that they use at Mizuna and Fruition. We buy our bread from Grateful Bread, which sells to Table 6, The Brown Palace, and Elway’s at the Ritz Carlton. I call our style “New American deli”. We use simple, good techniques. It’s better to do 20 things well than to do many things half-assedly. It’s hard to find good produce in Denver. We send a lot of stuff back, but sometimes that’s all the warehouse has. A lot of people think that you can open a restaurant with Grandma’s recipes, and then they realize that this is one of the hardest things you can do. I cooked for eight years before opening my own restaurant. When we started, Masterpiece was just an empty shell. We did all the painting and tiling. It took two months to build. But that’s what we could afford. Our biggest challenge has been learning how to run a small business. You do your business plan, and you think you know what people want. We wanted to do a gourmet-to-go, but our diners wanted sandwiches. They get their meats and cheeses at Whole Foods. The key is dialing in on what makes money. We’d like to expand down into the Tech Center or maybe the mountain towns. There are plenty of burned-out fine-dining chefs in this town that would love to do something new.