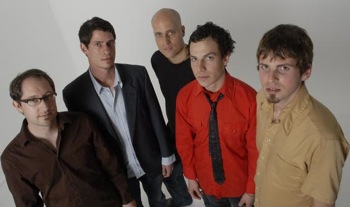 Boulder-based jam band The Motet are renowned with dance-happy Front Range audiences for their ambitious Halloween cover shows. They build from the foundation laid by genre forefathers Phish, who instigated a Halloween tradition in the the mid-90s of covering their favorite albums and, by extension, turning a generation on to LPs by the Velvet Underground and Talking Heads, bands that had previously gone unnoticed by much of the jam audience. But instead of covering an album start-to-finish for their annual late-October gigs, The Motet choose one artist and select from an entire catalog. In previous years, they’ve successfully donned an impressive range of sonic costumes, including Michael Jackson, Jamiroquai, Prince, Stevie Wonder, Madonna, The Beatles, and Tower of Power. This year, their Talking Heads incarnation was a huge success, with each of the four Front Range shows selling out. Tonight’s encore performance is in response to that popular demand. The Motet dress as well as sing the part, and they’ve got a formidable David Byrne doppelganger in Jans Ingber, who dons the nerdy suit, inflects the spastic delivery, and luxuriates in the so-bad-it’s-good white-man dancing. They employ two female singers in Liza Oxnard and Carrie Sangiovanni, a la the Stop Making Sense line-up, and String Cheese Incident‘s Kyle Hollingsworth guests on keyboards and primitive 80’s synthesizer. (Watch video of their entire Halloween gig at the Fox Theatre in Boulder.) When not masquerading, The Motet spend the rest of the year touring and recording in street clothes, playing original material. Formed in 1998 by drummer Dave Watts, the group’s primary concern is rhythm, and they combine various aspects of American funk and jazz with Afrobeat, Latin, and Caribbean sounds to create their personalized take on improvisational dance music. Sat. 8:30 p.m. Boulder Theater, 2032 14th St., Boulder $20. Ages 21+. 303-786-7030