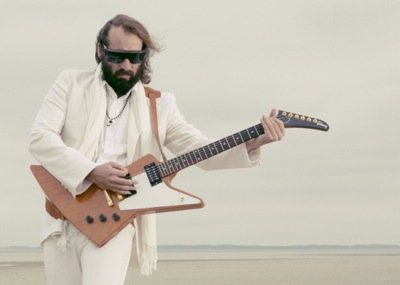 It’s a persona that us puritanically damaged Americans can never really pull off: the self-assured swinger who isn’t attractive per se (Tellier, who resembles a less-satiated Rick Rubin in “Miami Vice” duds, is far from any type of American sex symbol) yet swaggers effortlessly through a topic that we tend to either shout about or keep all bottled up.

Electronic music fans will recognize Tellier’s cohorts and countrymen. He is on Air‘s label, Record Makers, and he worked with Guy-Manuel de Homem-Christo of Daft Punk on Sexuality.

And the Sexuality tracks “Pomme” and “Manty” incorporate the over-the-top, female panting vocals that Gainsbourg immortalized here. The effect, as when Gainsbourg used it, rings more distractingly silly than sexy. (Or could that just be my inner Puritan speaking?)

Movie maker and music tastemaker Sophia Coppola used a Tellier’s moody track “Fantino” in “Lost in Translation,” and Tellier doesn’t completely evade his artistic tendencies on Sexuality. “Sexual Sportswear,” for example, is a seven-minute synth workout that is more atmospheric drapery than dance-friendly. But, “Divine,” hands down the best song on the album, works because it’s just plain fun.

It remains to be seen whether Tellier will catch on in America like Daft Punk, Air, or Gainsbourg, but it won’t be for lack of trying. American Apparel is using “Sexual Sportswear” for an ad campaign and selling the album in their stores.

Tellier’s U.S. tour is only five dates long, and the man who performs to filled stadiums in Europe is squeezing into Denver’s favorite indie rock dive bar, Larimer Lounge, for this show. Watch Tellier, accompanied by a line of bearded ladies, in an Old World song competition called Eurovision.