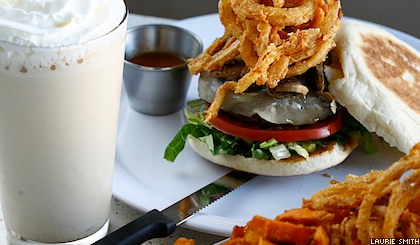 Since the August opening of The Counter in Park Meadows, the life of its executive chef, Ken Brown, has been something like “Around the World in 80 Days” on fast forward. He’s launched new restaurants in Connecticut, Dublin, and now Sydney, Australia. For each opening, Brown manages two-and-a-half weeks of training, buying, and branding. When he’s done, he moves on to start another location, but after three or four months, he returns to the already-established sites for an evaluation. Just weeks ago, he stopped into the Colorado restaurant for its review and took some time to reflect on the Front Range location for 5280.com readers.

When we start a new restaurant, the kitchen-team managers go to California, where our headquarters are. Simultaneously, we work with local vendors [near the new restaurant] to get our orders in line. Then, of course, we have to make sure that what we ordered on paper matches with what we receive. Within three days [of settling into the restaurant], we bring in eight trainers: four for the front of the house, four for the back. Once everything is in place, we do a mock service. We [the kitchen staff] serve the servers, then they serve us. Then, there are two more days of practice parties–for the service industry and for friends and family. Finally, we enlist a charity and do a promotional dinner with them. In the second week [of a restaurant launch], we are open for business. The culture of our company is to have fun. You have to take the job seriously, but you cannot take yourself too seriously. Even when I’m away, we monitor the business aspects of the restaurant through a POS [point of sale] system. We know how long it takes for a table to get turned or if someone is having problems turning a table. The Colorado team has a lot of energy, and the numbers are showing it. They recently broke their third sales record in three months. When I was in for the evaluation, a table of four called me over to tell me about a creative waiter. We’ve got 17 different sauces, and this waiter was an alchemist. He combined sauces and shared his mixes with the customers. That creates customer loyalty. The Denver restaurant has struck a balance between the local culture and The Counter culture.