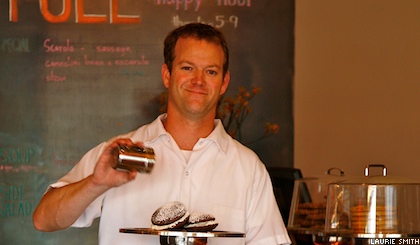 Throughout December, our Tasting Notes blog is featuring web-only interviews with select chefs from this month’s roundup of Denver’s Best New Restaurants. The birth of his daughter brought big changes to chef Bob Blair’s life. He left his job at Parisi and became a stay-at-home dad with the grand idea of pulling together a business plan for his own restaurant. Shortly into this tenure, Mickey Zeppelin, the developer behind the work-live community Taxi, approached Blair about opening a restaurant in his space. Still without a business plan, Blair accepted. Eleven months ago, Fuel opened, and the past year has been more successful than Blair ever hoped.

When Mickey Zeppelin approached me, I wasn’t totally sold. I had plans of opening a place on Tennyson, but my wife encouraged me to check it out. When I visited Taxi, my reaction was almost automatic: This made sense. I always thought that I would open a dinner place, but doing coffee and pastries in the morning and lunch, I have a chance to get my feet wet. I’m home at 5:30 p.m. three or four nights a week. I was reading “Setting the Table” by Danny Meyer when we were building the restaurant. There’s a section on naming your restaurant and how the name has to reflect the neighborhood. We thought maybe Fare, but then we came up with Fuel, and it was automatic. Our building used to be a welding garage when this was the Yellow Cab hub. Originally, I had a few must-have things on the menu, but those weren’t necessarily what people wanted. I had a soft pretzel sandwich with salami, cheddar, and mustard. No one ordered it. People really come in for the specials. Everyone talks about staffing as the most difficult part of owning your own restaurant. They tell you to expect the worst. I thought I did, but I didn’t know. Dealing with all the personalities and the transient servers who like to pick their jobs, is the toughest thing. In the first couple of months, two-thirds of our business came from Taxi and a third from the Wellington Webb building, where my wife worked. It’s switched since then. Now, two-thirds of our business comes from outside. People like [former city councilwoman] Susan Barnes-Gelt bring their colleagues in. We see new faces every single day. We saw the potential for business growth, but we never thought it would be this fast. We put in our business plan that we’d do dinner after three years. We were doing it one night a week after five months.