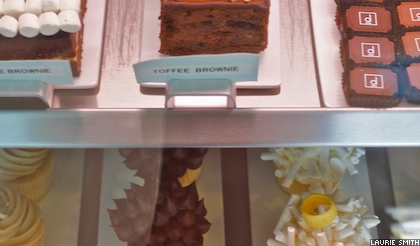 Two cruises over two years gave pastry chef Lisa Bailey and her husband, Food Network chef Keegan Gerhard, plenty of time to dream about starting their own restaurant. But the two were busy working in Las Vegas, balancing TV and festival appearances. A fateful trip to the Taste of Colorado in 2006, though, landed them in the kitchen of String‘s owner Noel Cunningham. Next door to the Uptown classic, Cunningham had an unused storage space–perfect for a restaurant. Bailey and Gerhard jumped right in, opening D Bar Desserts in late May.

We moved to Denver in February and began the restaurant demolitions on March 10. What we did is foolish. We’re not locals. We had no clientele. You do all this planning, then you hope that someone comes and that you’re not opening to the sound of crickets. We never could have imagined the exposure and word of mouth that we’d get. Savory food was an afterthought. We were testing those recipes a week before we opened. We thought, “There’s a lot of foot-traffic from the hospitals, maybe we should make some real food.” Plus, we knew we would always be in the restaurant and we would need to eat dinner. We live in Stapleton, but I’m only home for eight hours a night to sleep. On Sundays, the restaurant is closed, but we spend half the day in the shop or shopping for the restaurant. We joked, before we opened, about how we’re going to fit a cot into the office. There are lots of challenges in the restaurant business–keeping labor and food costs low–but we have a special challenge. We’re a married couple working all day long together. We knew each other’s quirks going into this because we’d worked events together in Vegas, but we also have to make time for ourselves and our relationship. It works because we are best friends. Our cake and shake [featured on the cover of this month’s 5280] was inspired by Keegan’s grandmother’s recipe. We dressed it up using Valrhona chocolate instead of Baker’s. There are so many things you don’t even know to think about when you start a restaurant. The very first day, we had someone ask us for a gift certificate. We thought, “You haven’t even tried our food, and you want a gift certificate?” As pastry chefs, we’re not the best marketers or servers, but we play it off, and hopefully people don’t know that we don’t know.