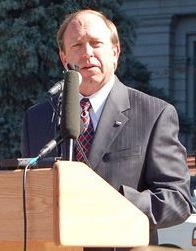 Colorado Attorney General John Suthers (pictured), the only Republican who holds statewide office, announced yesterday that he won’t run for U.S. Senate in 2010 nor will he vie for governor. Instead, he’ll attempt to keep his job in a bid for reelection. That’s according to The Denver Post, which notes that the move seems to be a blow for Republicans and to bode well for Democrats–particularly Senator Michael Bennet, a political newcomer, and Governor Bill Ritter.

Suthers’ withdrawal has been portrayed as a setback to the GOP’s national recruiting efforts and hopes to unseat Bennet, according to the National Journal.

There are others, though, and old names in Colorado die hard. It seems former Republican Congressman Bob Beauprez could try to take down Bennet, as ColoradoPols notes.

The Post, meanwhile, writes that former Congressman Scott McInnis may yet decide to challenge Ritter.