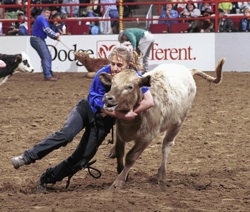 This year has been rough for cattle sellers struggling in a difficult economy, according to 9News, which reports from the National Western Stock Show that bids for cattle are fair, but ranchers’ climbing production costs are eating into profits. Still, the show goes on, and so do alpacas. They are considered livestock, as opposed to exotic animals, for the first time this year, according to the Longmont Times-Call. It’s an indication that the odd llama-like animals from South America are not the latest fad, as were gangly Australian emu birds in recent years. The stock show is in its 103rd year and full of traditions, including a calf-a-catch contest (pictured) that allows kids to nab a young calf, raise it for a year, then return to the show and sell it, as the Rocky Mountain News notes.