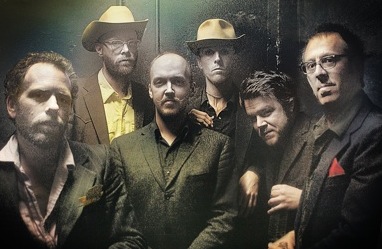 The genre “Americana” is often thrown around gratuitously. In its most general sense, the word implies that a rock group inflects a degree of country influence (steel guitars, cowboy hats, gravelly twangs and songs about drinking, trucks and guns) but isn’t a full-on country act. Hailing from Denver, much-lovedÂ Slim Cessna’s Auto Club is an Americana band but in a more profound sense than the mere prerequisites of visual and sonic apparel. In addition to incorporating old-school instruments like the banjo and pedal steel into its unique blend of rockabilly, gospel, and punk, SCAC finds something eternally juicy in our American roots: God.

SCAC shows are less secular rock concerts than deliriously ecstatic tent revivals. The group is led by the double-frontman setup of Slim Cessna and Munly. Their performance often resembles theater, with the Western-wear-bedecked Slim playing the smiling evangelical preacher, and the gaunt, shadowy-eyed Munly playing the more boyish and creepy sidekick. Together, they sing catchy and anthemic songs about an angry, book-of-Revelation-style God, and weave murder and revenge stories that can be disturbingly twisted. Sound like choice ingredients for a dance party? Unorthodox maybe, but it does the trick. Slim shows often end with the crowd all sweaty and smiley from raising their hands and stomping the floor, some of the most doubtful among them having gotten some strange kick out of demonstrating churchy behavior. Another man of the rock ‘n’ roll cloth, Reverend Horton Heat will headline the show. Denver-based punk band Reno Divorce will take the stage before Slim. Fri., Jan. 30, 9 p.m. Ogden Theatre, 935 E. Colfax Ave., 303-830-8497 $9.33 in advance, $25 day of show. Ages 16+