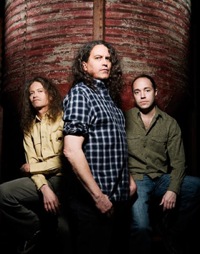 Veteran rockers the Meat Puppets didn’t set out to be particularly appetizing. The Phoenix-born band, principally comprised of brothers Curt and Cris Kirkwood, began as an abrasive punk act in the early ’80s.

The Puppets set themselves apart from other hardcore bands of the Reagan era, however, by marrying a hazy, country vibe with irreverent noise, deliciously surreal lyrics and aggressive lead guitar playing. Their mid-’80s recordings on trailblazing indie label SST Records are underground classics.

It wasn’t until the flannel-friendly ’90s that the Meat Puppets finally broke, if briefly, into the mainstream. On an MTV Unplugged episode that would air ubiquitously, Kurt Cobain invited the Kirkwoods onstage to help cover three songs from Meat Puppets II. The publicity helped make the Puppets’ 1994 album, Too High To Die, a big seller, and its first single, “Backwater,” a hit on rock radio, in time turning into a yummy bit of nostalgia for aging Gen Xers.

After some turbulent times–waning fame and Cris’ struggle with drugs–2007 marked a strong return for the group. In a decade that’s embraced reunion tours, and thus the legacy, of like-minded alt pioneers like the Pixies and Dinosaur Jr., the Meat Puppets are now able to indulge their more raw, recorded-on-the-run sound of yore. But, don’t expect their show to simply be a limp, greatest-hits exercise. Look for a strong continuation of a distinct and vital band.

Portland youngsters The Shaky Hands will open the show.