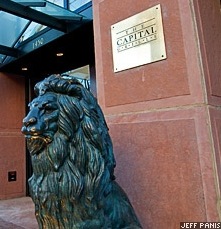 Two months ago, friends of mine living in the foothills outside Boulder called to say they wanted to come to Denver for dinner. They wanted to dress up, valet-park, and dine someplace with a heady downtown vibe–and they left it up to me to choose the restaurant. Immediately, I thought of The Capital Grille, the dark-wood and white-tablecloth steak house in Larimer Square. Although I’m not normally a fan of pricey porterhouse joints, I’d been there recently, and my tender rib-eye and creamy lobster mac ‘n’ cheese were so dead-on, I left feeling satisfied and self-confident. And the tropical pineapple martini–well, let’s just say it’s likely to rate a mention in my next Christmas letter. So, my friends and I set a date. But as I imagined the meal, I began to fret. I worried that my friends would be offended by the price of the steaks and the intimidating heft of the wine list. I worried that they’d calculate the cost of two cocktails and mentally substitute all the other worthier things they could be spending their money on. Yet, I didn’t feel comfortable asking them what their price point might be. Bringing up the subject of money would diminish the fun, and the bit of carefree extravagance, this meal promised.

By the day of our date, I’d rationalized my Capital Grille choice. My friends said they wanted dinner somewhere with a big-city feel, right? And it wasn’t as if they couldn’t afford it. He’s a lawyer, she owns a design firm, and they’d just returned from a vacation in Europe. Weren’t they–like all of us–entitled to a little fancy living every now and then? But then again, maybe I should have at least mentioned the nothing-cheap-about-it cost of the place. But how? Meals are supposed to bring people together, not remind them of socioeconomic differences. When one person eats or drinks more than another, it’s best, according to etiquette experts, to overlook the disparity, because dining out should be about friendship and celebration, not price and consumption. As it turned out, when I arrived at The Capital Grille, she was sipping a goblet of Pinot, he grasped a heavy tumbler of Scotch, and their first words were, “This is great!” But still, I need to know: How do you talk money and meals with friends without presuming too much–or spoiling the celebration?