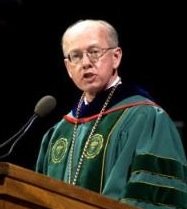 Former Colorado State University president Larry Penley has finally turned up. He’s in Moscow–Idaho, that is. After resigning under a cloud of speculation in November, he’s now one of the top five contenders to become president of the University of Idaho, according to the Northern Colorado Business Report.

Penley was “very candid” in interviews about why he abruptly quit CSU, Idaho State Board of Education spokesman Mark Browning tells the Fort Collins Coloradoan. Frustratingly, Browning declined to provide details. Penley and CSU have refused to discuss why he quit after more than five years in charge, receiving a $360,000 salary when he left.

Meanwhile, at CSU-Pueblo, there’s a tug-of-war between faculty members: Some say the next CSU system chancellor should have an academic background, while others would back someone with business experience, according to the Pueblo Chieftain.