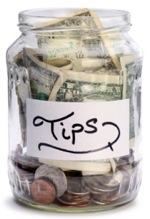 After a long day of skiing recently, I called in a takeout order from Mici Italian. I wanted salad and pizza, and sure, I told the person on the other end of the line, I could be there in 15 minutes to pick it up. It was 8 p.m. and snowing when I swung open the door of the brightly lit Cherry Creek spot, and as I did so, the chef, cashier, server, and a fourth guy–perhaps the manager–came to attention. I was the only customer. My warm pizza came flying out of the kitchen, red pepper flakes were pulled down from the shelves, and my antipasti salad was tucked in a bag. Almost as quickly as I walked in, I’d be headed out again. I just needed to pay the bill.

Under the total there was a line for tip. Was I responsible for leaving one? I’d driven to the restaurant, but the servers had packed up my meal. Of course, I’d have to unpack it at home. If this had be a sit-down dinner, with table service, I wouldn’t have hesitated to leave 15 to 20 percent for my pleasant server or eager buser. Apparently, I’m not the only one perplexed by the issue of tipping for takeout. Michael Bauer, the longtime restaurant critic for the San Francisco Chronicle, admits that since there is no service involved in his takeout lunches, rarely does he have a justified reason for leaving a tip. Yet he almost always signs away 10 percent. Equally divided are the diners of online forums, who swing between adamant opposition to tipping for takeout to arguing that it is essentially the same as leaving change at the local coffee shop. That night at Mici, I drew a line through the tip section, signing only for my meal total. But I still wonder, Did I do the right thing?