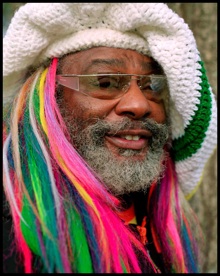 Though the Grateful Dead‘s catalog is assumed as the holy scripture of Colorado’s jam band scene, the 68-year-old’s legacy– most notably while with his prolific ’70s groups, the funky hit-makers Parliament and the more psychedelic-rock focused Funkadelic–is arguably just as important to present day jam bands.

Not to say that George Clinton is underappreciated. It’s not as if his act is relegated to dive bars. (The Fillmore is one of Denver’s largest rooms.) It’s that longevity–Clinton and some version of his P-Funk All Stars have been touring consistently for nearly two decades since his â€˜90s comeback–isn’t as seductive to many attention spans as finality.

Colorado’s own U.S. Pipe will open the Denver show. The group is heavily influenced by Parilament-Funkadelic, and features Chris “Citrus” Sauthoff, a one-time touring P-Funk All Star, on lead guitar and vocals.