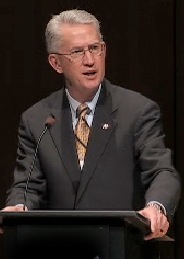 With a $1 billion deficit looming over Colorado’s state budget in the next 18 months, Governor Bill Ritter has pulled out the budget ax–and it’s a big one.

State workers will have forced unpaid vacations and forgo raises. Two prisons will be closed. A property tax for seniors will be eliminated. Various news organizations are reporting on the cuts, including The Denver Post, which additionally reports that services for the mentally ill will be slashed.

Higher education is slated for $100 million in cuts, according to 9News, a situation that leaves Metropolitan State College of Denver President Stephen Jordan (pictured) anticipating a 5 to 7 percent rise in tuition. The University of Colorado, meanwhile, could adjust by making cuts of its own, according to The Associated Press.

State lawmakers must mull the governor’s ideas, and a federal economic stimulus package winding its way through Congress could help. Yet Todd Saliman, Ritter’s budget director, cautions against too much optimism, noting that there are no assurances federal money will save the day, as the Pueblo Chieftain reports.