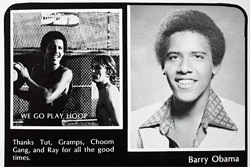 A group of students at Boulder High School want to change their school’s name to Barack Obama High School and plan to formally announce their campaign in a news conference this afternoon. The students want to recognize the “momentous achievement of his election as an African-American,” according to a press statement cited by 7News.

Ben Raderstorf, 16, the youth volunteer coordinator for Democrat Will Shafroth’s losing bid for the Second Congressional District and president of the 12-member Student Worker Club, is leading the charge.

A spokesman for the Boulder Valley School District says the district will consider the idea, in “the spirit of civic engagement,” but the group has a long road ahead, according to The Denver Post. District regulations only allow the renaming of schools when a new school is created or under “extraordinary circumstances.”

As for Obama, this is what he looked like when everyone knew him as “Barry Obomber” in high school.