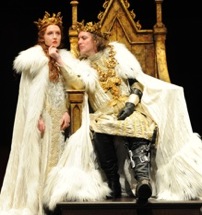 Rarely in modern theater do Shakespeare’s plays get an Old English staging. Twelfth Night might be set in Rome. Or Macbeth in a restaurant kitchen. Which is why the Denver Center’s current performance of Richard III is so refreshing. The story of an evil-hearted nobleman who wants the thrown, and will destroy his friends and allies to get it, is told amid crowns, corsets, and royal robes, giving audiences an authentic viewing of the Bard’s tragic tale. Under the direction of Jesse Berger, the artistic director of New York City’s Red Bull Theater, the play takes no shortcuts. Realistic fight scenes and brutal depictions of death keep the stage captivating. Through Feb. 28: Mon-Thu 6:30 p.m.; Fri 7:30 p.m.; Sat 1:30 p.m., 7:30 p.m. The Stage Theatre, 1101 13th St. 303-893-4100, $42-$51