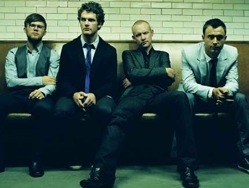 Colorado has had its share of music stars but never really got the recognition many of its musicians say it has long deserved. Perhaps that will change because of The Fray, which now holds the top spot on Billboard’s album charts.

The Denver band’s self-titled second CD debuted at No. 1 with sales of more than 179,000 this week, according to the Denver Business Journal, nudging Bruce Springsteen’s “Working on a Dream” out of the top slot.

Arguably, The Fray are now the most commercially successful Colorado recording artists since Aspen folkie John Denver reigned supreme in the 1970s.

The other artists in the top five this week are Dierks Bentley, Taylor Swift, and BeyoncÃ©.