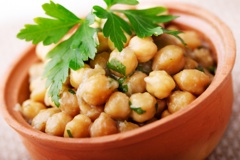 On the second shelf of my pantry, next to the soy and Worcestershire sauces, sit two cans of garbanzo beans. Those two cans are permanent fixtures. If I use one, the next trip to the grocery store I buy two more, because if I were ever to be caught in the kitchen without garbanzo beans, I’d be like a fisherman without his line. Those nights when I arrive home after a long day at work (plus, a stop at Target and the library)–when I’m too weary to bread, brown, and bake anything as sophisticated as chicken alla parmigiana and my hunger is too impatient to let frozen fish defrost–I’d have to resign myself to cheese and crackers. With garbanzo beans in the cupboard, though, I don’t have to stoop so low. The simple slip of the can opener around the sealed edges of a tin can means that dinner is no more than 20 minutes away.

I dice an onion, wiping away the tears, then a red pepper, and if I have it, a carrot. Into a pan of hot, shimmering oil olive, I throw all three, letting them soften and begin to brown. Then, I add the beans, shaking the pan and tossing them in olive oil and vegetables. The heat penetrates and the beans begin to brown and pop. That’s when I pour a lightly beaten egg into the mixture, sprinkling in salt, cracked pepper, and flecks of freshly chopped parsley. I first learned of fried garbanzo beans in Spain. Often when mamitas have rehydrated too many beans for their midday chorizo and garbanzo stews, they’ll use the extras to make a quick dinner just like mine. Or sometimes, they’ll add onions, spinach, and sausage for a more meaty dish. But the idea is always the same: quick, healthy eats. Over the years, garbanzos have become my go-to meal when I need something fast. My friends, I know, have similar favorites. The Puebloan always has enchilada sauce on hand so that he can quickly dip his tortillas in it, before filling them with sautÃ©ed beef, and topping them with a fried egg for an easy Southwestern supper. The well-traveled Russian has a way with Asian ingredients. Whatever she has in the fridge gets served over rice noodles. Having an in-a-hurry meal standby is like having a friend you can count on to pick you up when your car breaks down. And since it’s so darn important, I suspect, that most home cooks have one. What’s yours?