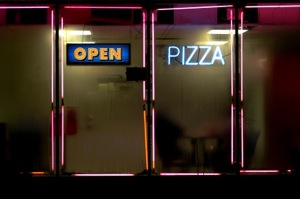 A few weeks ago, I went to a lecture after work at the University of Denver. The talk about novels and literature filled the soul but left my stomach so empty that by the time I reached my car, the hard fingers of hunger had clamped a tight grip on my stomach. I glanced down at my watch. 8:45 p.m. Heading home to make dinner was not an option. My hunger would never tolerate the time it would take to drive, prep my ingredients, and actually cook. I needed a restaurant. Preferably someplace quick. Maybe El Taco de Mexico? No, that would never work. Even though the sign on the door would still read “open,” I’d arrive at the restaurant just as the women who man the grills pulled out their buckets of soapy water for the night’s cleanup. Maybe I could try Little Ollie‘s? The beloved Cherry Creek Chinese restaurant didn’t close until 9:30 p.m. But I hesitated.Â While I’d certainly arrive before the doors locked, I’d probably get hurry-up-and-eat stares from the waitstaff.

Finally, I settled on Japon for brothy udon soup. I knew I could eat and leave before the restaurant closed at 10 p.m. A friend of mine, who’s worked for years in pizza shops on the East coast, insists that this standard–accepting a seat at a restaurant only if you have time to eat and leave before the closing hour–is a must. He argues that taking a table when a restaurant is nearing its final business hour is unfair to the eatery’s crew. My suspicion is that he’s been stung a time or two by diners who linger–and linger–long after his oven’s cool. As a diner, though, part of me feels entitled to a table as long as a restaurant’s doors are open and its kitchen is operating.Â Which means that night at DU, I shouldn’t have worried about the servers at Little Ollie’s–and darn it, I should have headed over for the sesame chicken I’d been craving. Regardless of the time I arrived, I would have been a paying customer. But part of me, too, understands my friend. Plus, dining out–and paying good money to do so–is no pleasure if you’re treated as an imposition. I wonder what to do the next time I’m searching for a meal at the typical restaurant closing hour. What time should I cut myself off from taking a seat at a restaurant?