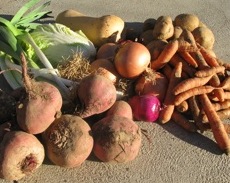 Two years ago, my eating habits underwent a radical policy shift, inspired in part by Michael Pollan’s “Unhappy Meals” in The New York Times Magazine. The political-minded food writer declared you shouldn’t “eat anything your great-great grandmother wouldn’t recognize as food.” That night I raided the cupboards, tossing everything from granola bars to the strawberry Pop-Tarts my husband and I liked to sneak after the kids went to bed. As months went by, my visits to farmers’ markets and Whole Foods skyrocketed. But so did my grocery bill. Eating organic is one thing. Affording it is another.

Then a friend told me about Monroe Organic Farms, a farm in Kersey that runs a farm-share called a CSA (Community Supported Agriculture). Members pay a fee up front and collect weekly provisions of produce from June to October. (Like Monroe Organic, Red Wagon Organic Farm and Grant Family Farms also deliver to pick-up spots in Boulder and/or Denver.) I took a leap of faith and signed up for a half-share. For five months my kitchen was filled with tantalizingly fresh foods. Familiar ones like sweet corn and watermelon. Strange ones like turnips and kohlrabi. All of them things my great-great grandmother would have recognized. And now, thanks to the CSA, my kids recognize them, too. I joined Monroe because I believe in organic and local, and because I wanted to lighten my grocery bill. But I didn’t foresee the side benefits, like how entranced my kids would become as my kitchen turned into part science project/part Iron Chef (“The secret ingredient tonight is snow peas. Go!”). Or how exposure to peak-of-flavor produce would expand our family’s palates. My 7-year-old once asked for thirds of turnip purÃ©e, but puckered her lips when I tried to replicate the dish this winter with ones from the store. In this economic climate, a CSA makes loads of sense. But only if you like to cook. If you spend more time out on the town than in, you’ll throw away more than just a fridge full of perishables. And if organic isn’t high on your list, an organic CSA won’t save you money. Per pound, prices for organic produce remain higher than for conventionally grown goods. Just how much (a quarter? a third?) depends on the season and where you’re shopping. If organic is a priority, however, you can save big with a CSA. Last summer during a visit to Monroe, my family picked 50-plus pounds of vine-ripened tomatoes like ones I’d seen at a local market for $5.99 a pound. That harvest alone nearly covered the cost of our farm share. With deadlines for many CSAs coming up this month, now is the time to consider what Pollan famously calls the “omnivore’s dilemma.” Does it make sense–financial and otherwise–for you to join a CSA?