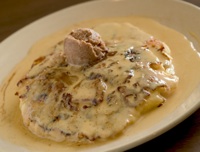 Our waitress was eyeing us, eyebrows raised, in disbelief. Here it was, a weekday night at Marco’s Coal-Fired Pizzeria and our party of four had just downed a plate of juicy chicken wings, three heaping Tuscan-style pizzas, and eight pints of beer. And my husband–never one to back down from a culinary challenge–had just ordered the restaurant’s hyper-caloric dessert invention: a Nutella pizza. To say I was embarrassed would be wrong. (I’m not opposed to pigging out if the treats are as delicious as Marco’s two golden pizza crusts filled with gooey Nutella spread and dusted with powdered sugar.) But the ultra-rich pizza did get me thinking. Earlier that day, I’d discovered This is Why You’re Fat, an online gallery of the nation’s most outrageously fattening foods. Sure, I found the bacon-wrapped mozzarella sticks, deep-fried chocolate cupcakes, and a seven-pound breakfast burrito better for comic relief than actual eating. But the site made me wonder, aren’t there some absurd foods that are absolutely worth it?

Marco’s chocolatey pizza, for one? I’d put Steve’s Snappin’ Dog‘s Rippin’ Rockies dog, a deep-fried hot dog topped with green chili, grilled red onions, sour cream, jalapeÃ±o peppers, and yellow mustard on the worthy list. And how about Snooze‘s caramel cinnamon roll pancakes (pictured here)? The white-chocolate chip cake is covered in a vanilla-crÃ¨me anglaise and bourbon-caramel glaze, topped with swirled cinnamon butter and toasted pecans. I think Hapa Sushi‘s multiple orgasm roll (cream cheese, crab mix, and smoked salmon tempura-fried and baked in a cream sauce) fits the bill, too. Sometimes these indulgences are the reason to eat out. And since Denver’s got a thing for comfort food, I bet that this is only the beginning of the city’s so-bad-for-you-but-so-delicious list. What else counts?