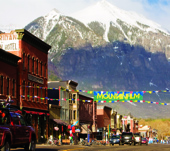 For its 31st year, Telluride’s Mountainfilm Festival combines a themed symposium with film screenings to address the world’s most pressing political and environmental issues. And this year’s guest list is stacked, with the likes of Ken Burns (PBS documentarian), Nicholas Kristof (New York Times), and Dan Barber (chef of NYC’s Blue Hill).

The four-day festival opens today with a conversation about food, in which chefs, activists, and journalists will discuss organics, genetically modified foods, and rising commodities prices. The following days carry on with films like the world premiere of Burns’ The National Parks: America’s Best Idea and a documentary about Kristof’s reporting in Darfur.