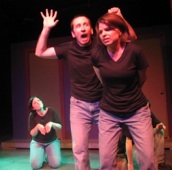 Before the audience sits back, relaxes, and enjoys the show tonight at Bovine Metropolis Theater, there’s one thing the attendees must do: pick a performance title. The Bovine actors will then use that tagÂ  (which might be anything from “My Cousin’s Wedding” to “The Sound of Screaming Elbows”) to create an on-the-spot, hour-long musical.

While the theme of the show isn’t revealed until the performance starts, by the time it’s determined it will take the form of comedic songs with catchy lyrics and lively dancing. The improv crew behind these hit-and-run musicals, as they’re called, has worked with Chicago’s acclaimed Second City and Los Angeles’ Bang Studio, as well as several other national studios. Bovine will host these improv musicals every Friday through August.