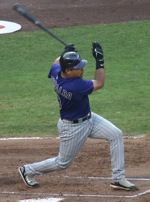 Colorado Rockies catcher Yorvit Torrealba’s 11-year-old son and two of the boy’s uncles are safe after the three were rescued from kidnappers in Araira, Venezuela, and three suspected captors were identified in a lineup. Torrealba, who was with the Rockies in Houston at the time, secretly caught a plane to Venezuela after hearing of the plot, initially agreeing to demands to pay about $500,000 (1 million Bolivar) in ransom, according to The Denver Post and New York Daily News. Yet before the payment was made,the uncles were able to reach a safe house and telephone for help. Torrealba might not return to play for the Rockies until next week in Milwaukee. That’s okay with Colorado Rockies President Keli McGregor: “Yorvit knows that he can take the time he needs and will rejoin the club when the time is right” (via Sports Illustrated). Meanwhile, Torrealba’s agent, Melvin Roman, tells Fox31 that one more action will be taken: “My recommendation is to take the whole family and to move to the [United] States; and that is what [Torrealba] is going to be doing.” The Daily News notes that five years ago, then-Detroit reliever Ugueth Urbina’s mother was kidnapped in Venezuela and rescued several months later. When the Daily News visited Mets ace Johan Santana in his Tovar, Venezuela, home last year, an armed guard was on duty.