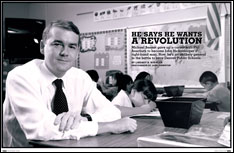 It appears that Michael Bennet, the former Denver Public Schools chief, quit his job to become a U.S. senator just in time. A new report by the Colorado Children’s Campaign, “Denver’s Public Schools: Reforms, Challenges and the Future,” points to big problems inside the school system Bennet once oversaw with revolutionary zeal. “The results are unacceptable on all levels–the dropout data, graduation rates, achievement and achievement gaps,” Alex Medler, a Children’s Campaign vice president, tells The Denver Post. While student performance is improving, Denver schools lag in nearly every category both within the context of Denver’s own goals and when compared with similar schools around the nation. Wide achievement gaps exist between students of different backgrounds, and few students perform at grade level, a trend that gets worse as students grow older. The report recommends that communities intervene with goals, such as working hard to increase high school graduation rates by about 5 percent a year–from about 50 percent in 2007 to about 85 percent by 2013. Meanwhile, Lieutenant Governor Barbara O’Brien says Colorado seems well poised to win extra federal stimulus money for education reform, according to The Associated Press. She notes her meeting in North Carolina yesterday with U.S. Education Secretary Arne Duncan, who is set to hand out $4.4 billion to states that promise to push school reforms. In Colorado, that could mean requiring Saturday classes for struggling students or injecting teacher bonuses. Education Week has an interesting sidebar: A national study casts doubt on whether charter schools are better than public schools around the country–with the exception of Denver and a handful of other states, where charters are doing better.