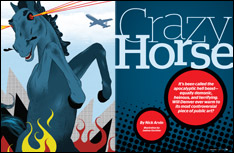 More than 11,000 Facebook users say they hate the 32-foot-high blue mustang sculpture outside Denver International Airport–“Bluecifer”–and want to see it removed. But the campaign hasn’t changed anything since the Facebook page was created several months ago, and that’s given the magazines time to chime in thoughtfully on the 9,000-pound horse. An article in Cowboys & Indians points out that the city won’t consider moving the sculpture away before 2013, marking five years at the site. “People’s view of public art changes as they look at it,” says Erin Trapp, director of the Denver Office of Cultural Affairs. “We’ve seen a tremendous shift in public opinion already.” Trapp says people who appreciate the horse see it as emblematic, for instance, of Colorado’s tension between wide-open spaces and increasing urbanization. Author Nick Arvin, meanwhile, writes for 5280 that you can thank his wife, Rachel Hultin, who started the Facebook page, for the worldwide news coverage that began with the Denver Daily News. Arvin, whose own opinions about the horse fluctuate, notes the sculpture “is forcing Denver to engage in meaningful debate about public art, and when the next controversy arrives upon us, Denver will have this one as a point of common experience, a term in the vocabulary, and Denver will have a better understanding of what public art means to Denver.”