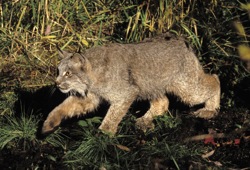 In the early 1970s, logging, trapping, poisoning, and construction finally forced from Colorado the disappearance of the lynx, a small mountain cat with big padded feet and pointy ears (adult pictured). But in the late 1990s, wildlife officials began efforts to return the lynx to the state. Now comes news of their continued success. Biologists have discovered 10 lynx kittens in five dens this spring, according to The Associated Press. “We’re really excited by the kittens that we found this year and are hopeful these lynx will contribute to a sustaining population here in Colorado,” Jerry Neal of the Colorado Division of Wildlife tells CBS4. In 1999, dozens of the cats were reintroduced to the Colorado wild via Canada and Alaska. Today, wildlife officials aren’t sure how many are in the state, but as the Grand Junction Sentinel notes, the kittens illustrate that Colorado can harbor a lynx population in a recovery effort that survived even despite a recent decline in snowshoe hares, the cat’s primary source of food.