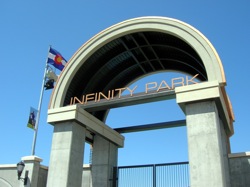 Glendale is aware of its image issues—particularly due to its notable strip clubs, such as Shotgun Willie’s and the Penthouse Club. But city leaders are working to change that image, and The New York Times reports that they’re using rugby to do it. Glendale is home to Infinity Park, the country’s only municipally run rugby stadium. The tiny city, entirely surrounded by Denver, hopes to build the unique centerpiece of Glendale into a nationwide brand, as it adds another rugby practice pitch (field) north of Infinity Park, which recently hosted most of June’s Churchill Cup, an international rugby competition featuring national teams from the U.S., Canada, England, Ireland, Argentina, and Georgia. The Times notes that although the tournament was plagued by stormy weather, 4,000 people came out for one of the games. As Glendale tries to build on increasing awareness and appreciation for the sport, Canada’s National Post offers a cold splash of water on America’s desires to dominate in international rugby. Canada’s senior men’s rugby team stomped the U.S. team 41-18 last weekend, qualifying for a trip to the 2011 Rugby World Cup in New Zealand.