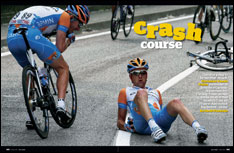 World-class cyclist Christian Vande Velde—a part-time resident of Boulder—crashed twice in yesterday’s 11th stage of the Tour de France but still found a way to finish the day in eighth place overall, the same spot he held when he began the day (via the Chicago Tribune).

The crashes reinforce doubts in the minds of many cycling watchers, who question the 33-year-old’s ability to contend in the race this year. Those doubts gain traction in light of a May 11 crash in the Tour of Italy, which gave him a hairline fracture of his pelvis, two fractured ribs, and three fractured vertebrae.

It’s not all bad for Vande Velde, though, who wrote for The New York Times that a day of rest on Monday was a welcome reprieve from the grueling demands of one of sport’s most challenging endurance events.

Then again, a profile of Vande Velde in this month’s issue of 5280 makes the case that he’s found the second wind in his career, four years after almost calling it quits. Vande Velde has proven himself as an elite rider—he placed fourth in last year’s Tour de France—but the 84 seconds he has to make up on Rinaldo Nocentini of Italy may be too steep a hill to climb.