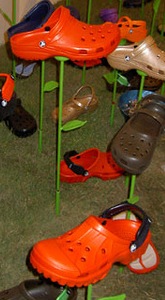 The days of Crocs, those ugly but oddly comfortable shoes that touched nearly everyone (from former President George W. Bush to Aerosmith lead singer Steven Tyler), might finally be over. As the New York Daily News writes, some people were never fans and many were ready for the “trend to be over even before the shoes hit stores in 2002.” Now, after the company lost $185 million last year, it seems everyone is predicting or alluding to the end of Niwot-based Crocs, including CBS Evening News anchorwoman Katie Couric, who blogs that Crocs recently gave 2,000 employees, a third of its workforce, “their walking papers.” Rachel Weingarten, a trend and marketing expert, opines to The Washington Post that Crocs are over and that in about a decade the nostalgia will set in and people will say, “Remember when we had ugly, Flintstone-looking feet?” The Post notes that the story of Crocs “mirrors the country’s tale of economic expansion and contraction.” The company, started by three friends from Boulder, went viral and made millions. Then the trouble began, as Robert Sanchez reported for 5280 last year.