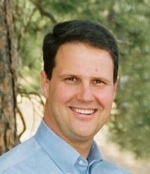 “Hands Off My Healthcare.” “Our Troops Did Not Fight and Die for Socialism.” Those are just two of the slogans brandished by roughly 400 conservative activists at the state Capitol yesterday, saying they favor national health-care reform, but not the kind endorsed by President Obama.

Jeff Crank of Colorado Springs (pictured), a former congressional candidate and state director of the conservative Americans for Prosperity, tells the Colorado Springs Gazette, “We can cover pre-existing conditions. But we don’t need to have a massive government-run system to do that.”

Instead, protesters say they would like to see restrictions placed on lawsuits that patients can file to cut down on malpractice costs as well as measures to make insurance “portable” from job to job, writes The Denver Post.

Jon Caldara, president of the libertarian-minded Independence Institute, says he opposes any “public option” that would allow the government to offer an insurance plan as an alternative to private insurance, as proposed by some, for people who can’t qualify for Medicaid, Medicare, or other government-run programs (via the Denver Business Journal).

Michael Huttner, founder of the liberal group ProgressNow, dismisses the protesters’ effort as one paid for by “out-of-state millionaires.”

Meanwhile, lawmakers in Congress are looking for ideas on how to shape reform, and one of the most prominent examples they have is in Grand Junction, which delivers high-quality care at a low price, according to the Post.