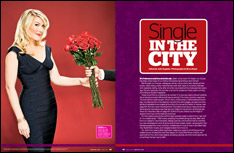 Nobody is saying that dating in Denver is easy. But when it comes to the cities in which you might—just might—have a chance at finding true, lasting love, Denver isn’t such a bad shot. Taking into account potential date spots like the Denver Art Museum and PS Lounge (a mainstay dive bar with a great jukebox on East Colfax), Forbes magazine ranks Denver No. 13 in the nation for finding singles. In addition to a decent nightlife, Denver’s relatively low cost of living and its coolness factor (ranked 20th) also play into Forbes’ decision. Westword assesses the Forbes data in typically irreverent fashion. But for all the optimists out there, 5280 recently took a look at being “Single in the City.” Want to get out there? Try any of the five singles-related events happening this week (via 5280.com).