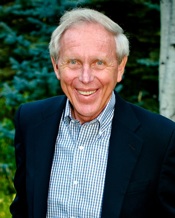 Less than a month after officially starting his job as chancellor of Colorado State University, Joe Blake joined university President Tony Frank on a road trip to tell businesses that cash-strapped universities, including CSU, need help building their finances (via The Denver Post).

But Blake himself (pictured) has cost CSU $19,000, thanks to the secretive meeting that led to his appointment in the newly created chancellor position.

CSU’s Board of Governors agreed yesterday to cover the legal costs of the three media organizations that filed a lawsuit over the board’s conduct: the Fort Collins Coloradoan, The Pueblo Chieftain, and The Colorado Independent. In settling the suit, however, the university has not admitted to breaking any laws.

Nonetheless, Coloradoan editor Bob Moore is claiming victory: “This settlement, and the increased transparency that we’ve begun to see at CSU, are positive signs that the culture is changing.”

The university also agreed to release portions of a recording of the May 5 meeting, and details are highlighted in this morning’s Coloradoan. Among them is an accusation by Doug Jones, the former Board of Governors chairman, that state lawmakers were “un-Christian” for pursuing a bill that would require more public input in the chancellor selection process.