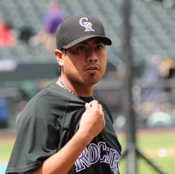 The Colorado Rockies played the proverbial small-town tourist in the big bad city the last few days, getting beaten up and mugged for three out of four games against the New York Mets.

They were able to take one out of two in yesterday’s doubleheader, with pitcher Jorge De La Rosa (pictured) earning his seventh consecutive win, a Rockies team record, according to The Associated Press.

The Denver Post’s Troy Renck writes that yesterday’s win, hours after getting smoked 7-0, showed that the Rockies do have offense, something that “was debatable after they failed to score in 27 consecutive innings, the longest the Mets have bageled an opponent since 2004.”

Renck’s use of the word “bagel” aside, the offense was atrocious, and it let the San Francisco Giants climb out of the wild-card hole to take back the lead after their win last night (via the AP).

The Giants have added some players coming into the league’s trading deadline, which hits at 2 p.m. this afternoon, but the Rockies haven’t made very many moves. They added pitcher Rafael Betancourt from the Cleveland Indians and veteran pitcher Mike Timlin, and bumped up young pitcher Jhoulys Chacin from a minor-league affiliate. Now the team is looking to add 6-foot-9-inch pitcher Mark Hendrickson from the Baltimore Orioles (via The Denver Post).